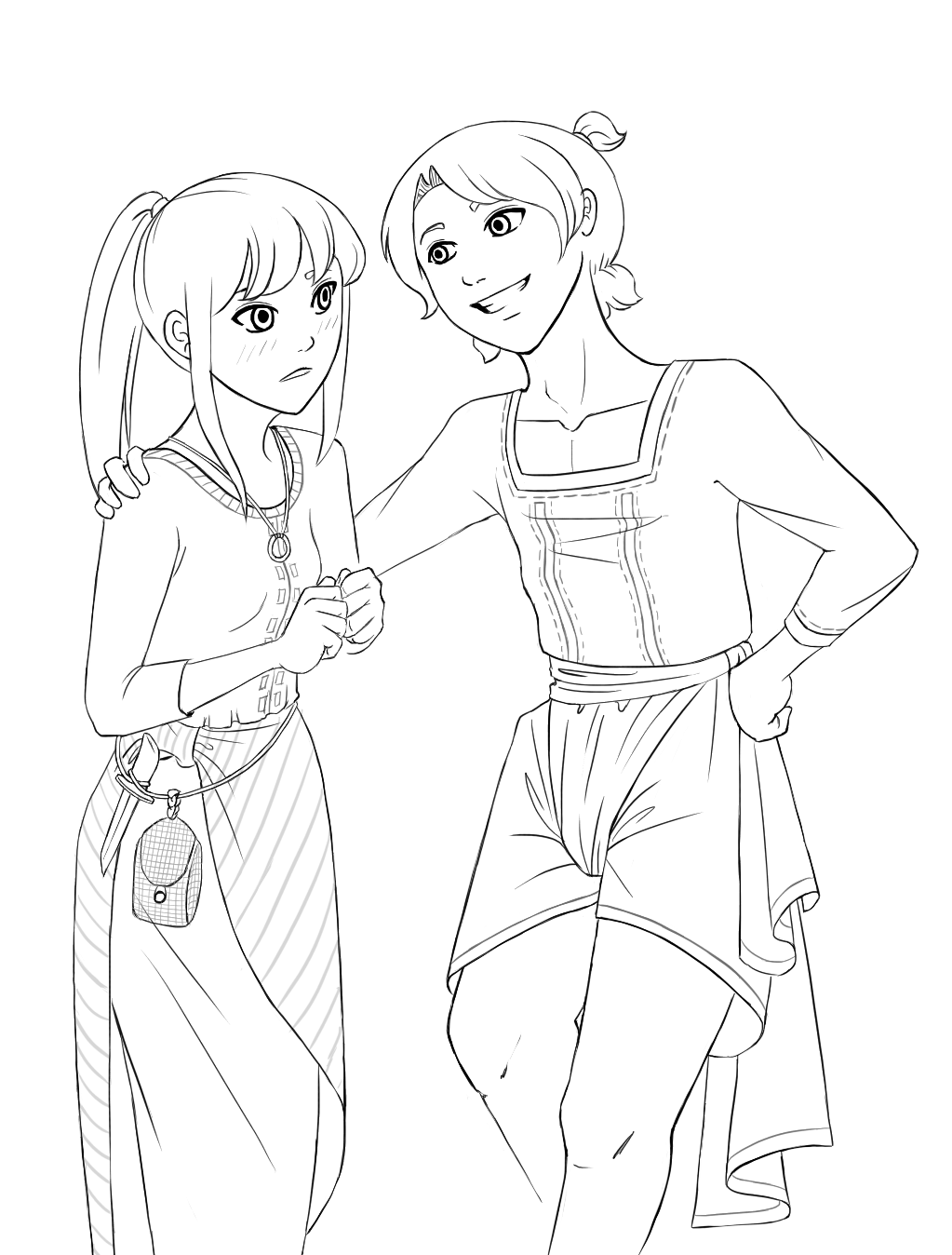 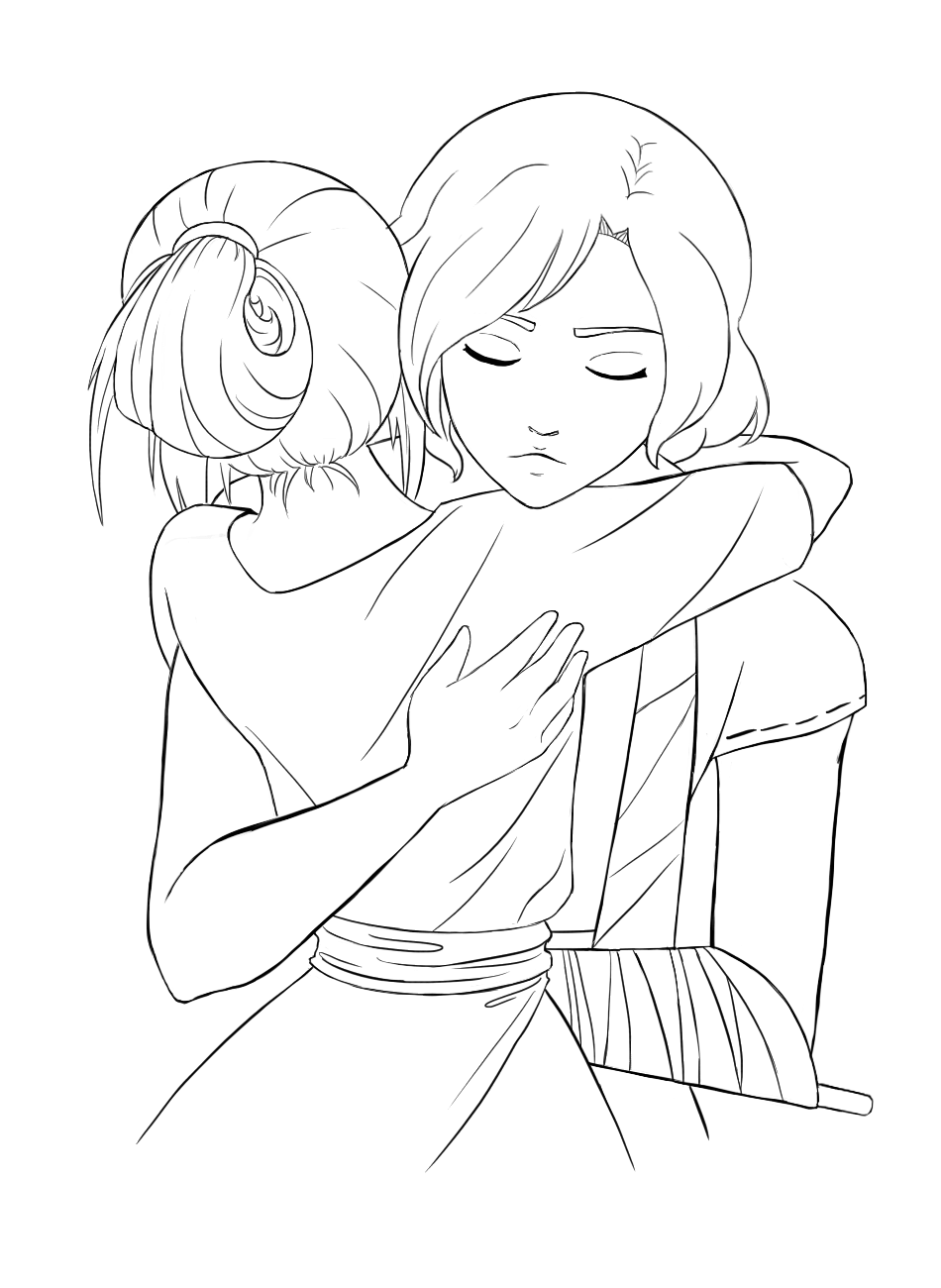 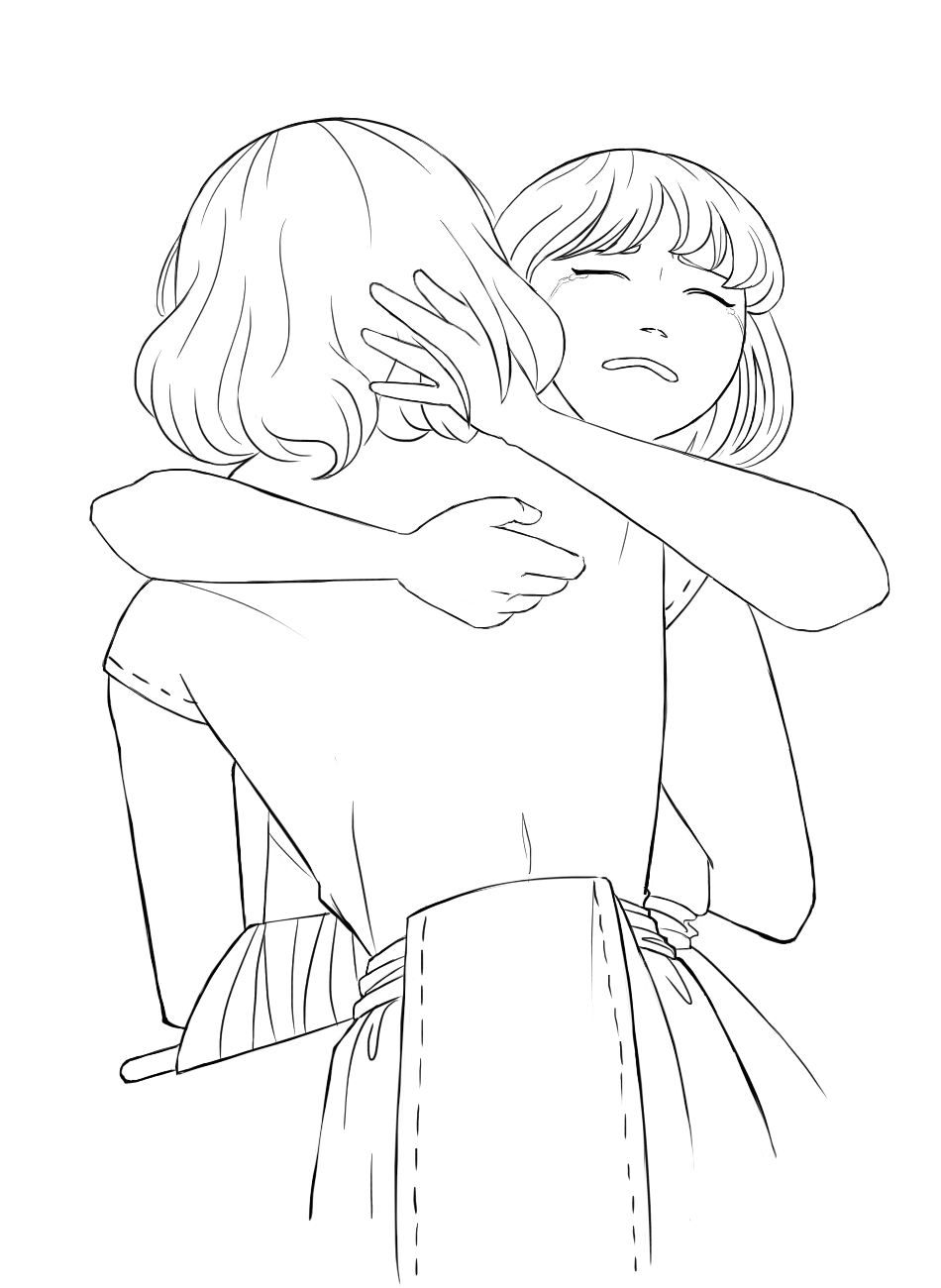 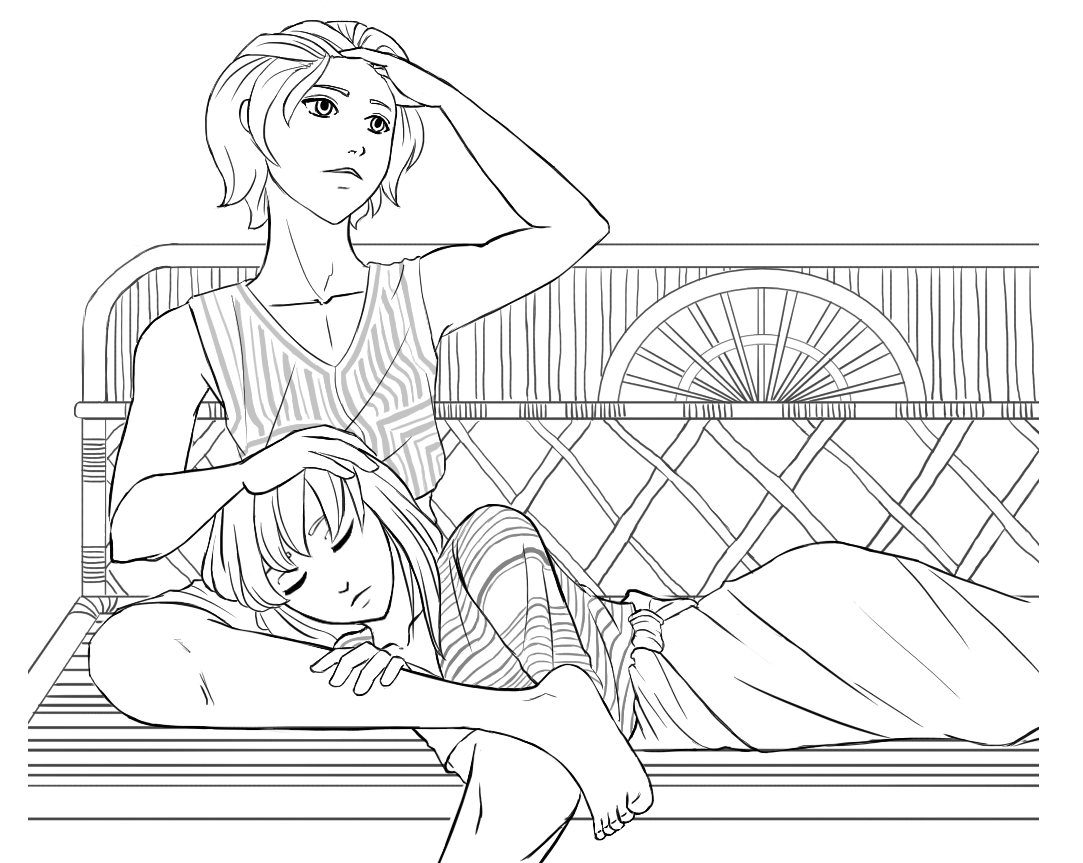 I took a short break from translating my novel and made some artwork. I was actually hesitant to take a break, because the translation for the last few chapters have gone really well. I felt like I didn't stumble as often over little words, thanks to the vocabulary I've learned while working on the previous chapters. I also learned to manage my time better.

But I had arrived at my 2-month mark, and I felt it's time to produce some new art content. I wish writing drafts could be as shareable as sketches, but I haven't figured out how to make those interesting enough to share on social media. Unfortunately that means every time I focus on writing, my social media presence really drops.

Anyway, I received an ask on Tumblr some weeks ago where I talked about Anina being touch-starved, and since then I couldn't get Sanino hugs and friendly touches out of my head, so I thought they would make a good concepts for artwork. The hugging sketches are actually from the ending scene of the novel! The other two are just hypothetical, though. 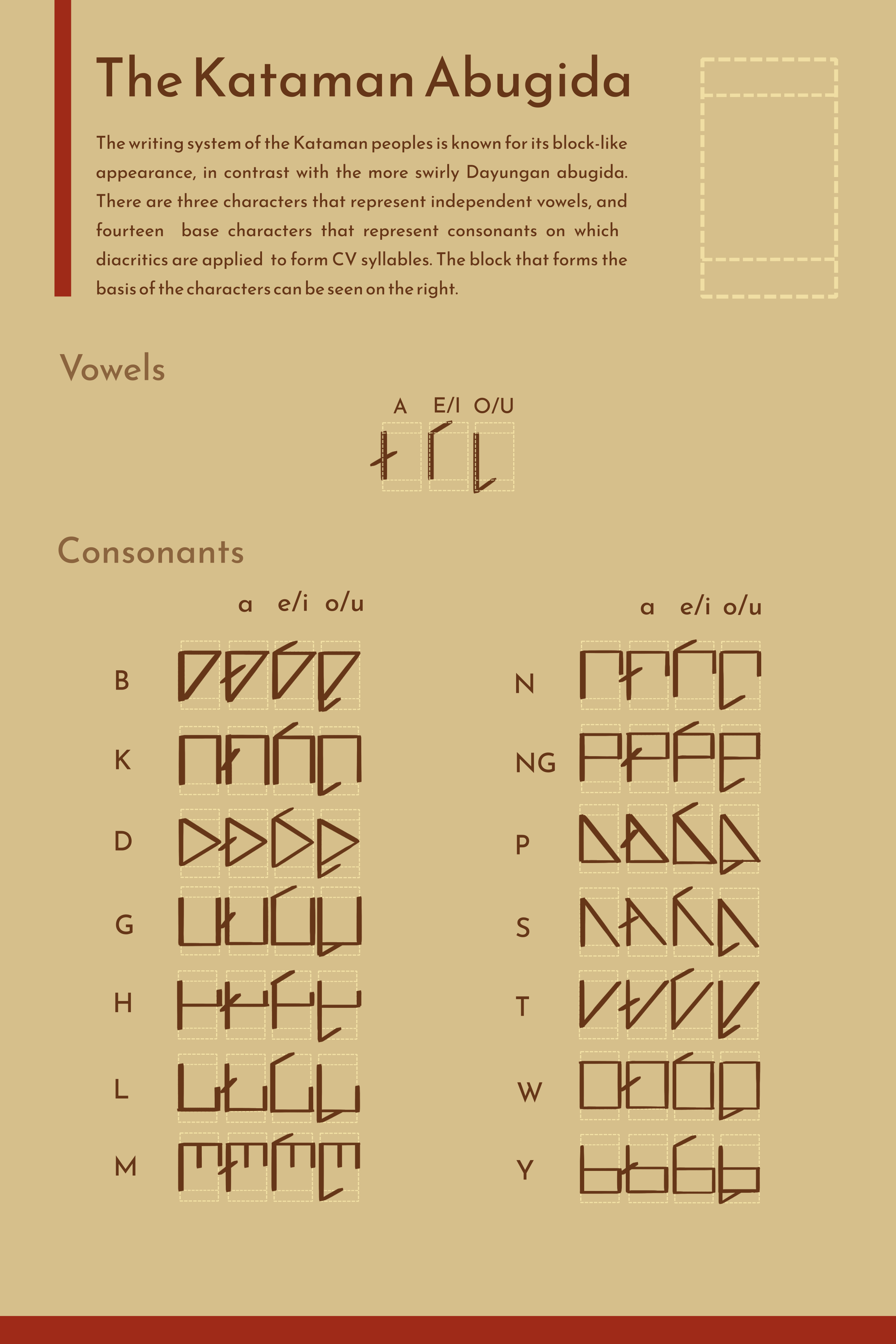 I also finally made a guide to the Kataman abugida! A friend of mine had asked what the ka character looks like, since she wanted to draw a fanart of Anina with it. At that time, I hadn't developed the symbols yet, but it was the reason I started to think of making a guide. (By the way, my friend did make an awesome fanart, using baybayin as a substitute while I got my act together.)

[The Kataman abugida] is largely based off of baybayin, especially since Katam is one of the regions analogous to the precolonial Tagalog region.

The major difference is that there’s no inherent vowel here, whereas baybayin has an inherent vowel ‘A,’ and if there was a consonant that wasn’t followed by any vowel, that consonant disappears altogether. Spanish colonizers tried to use a virama to “fix” this trait of baybayin, but according to this post, the natives weren’t fond of the idea because it didn’t align with their beliefs about the language.

I made the decision to go without inherent vowels altogether in the Kataman script, because it’s a scripting language for magic and it needs more precision for the magic to take. I'm not saying that baybayin isn’t a precise writing system, only that context played a large role in understanding the scripts. Considering the high literacy rate of precolonial Tagalogs, their writing system obviously served their needs. However, my world needs something different for the magic system.

Anyway, if some of the symbols of the Kataman abugida look like their corresponding alphabets, it has more to do with me being quite unimaginative, haha, and less to do with the fictional world at large. 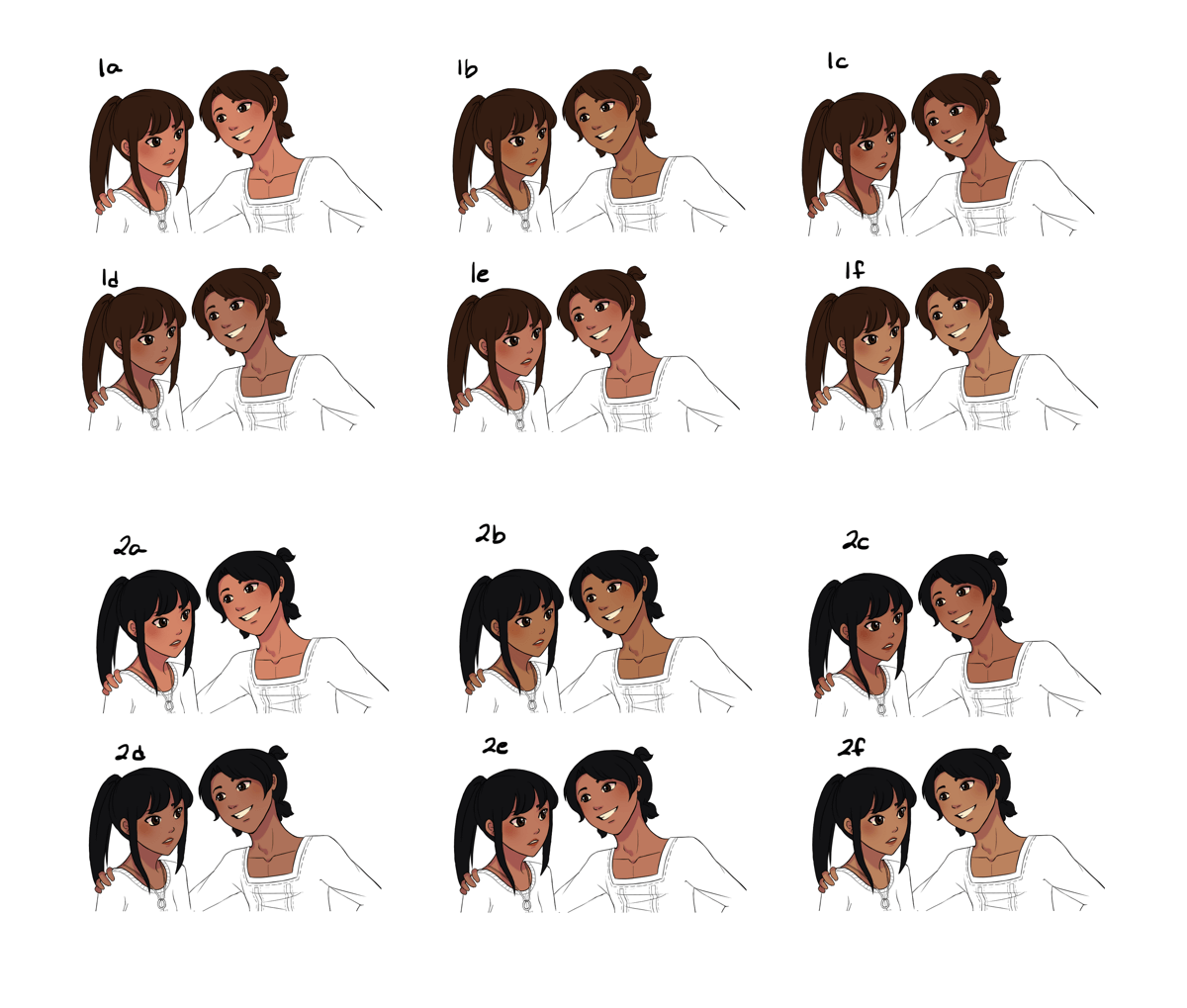 Now that I’ve invested in a good monitor that better colour accuracy, I decided to experiment a little more with Sano and Anina’s skin tone. Previously it was a real challenge to locate their skin tones with my blue-tinged laptop screen.

I know I edited a bunch of my artwork a few months ago to fix their skin tone, but I’m not completely happy with new one either. Sometimes, at a quick glance, the characters look too red -- unnaturally red -- like they just came out of a blazing sauna after being trapped in it for ten hours.

It’s really hard to settle on a definite colour, because colour is relative, and I know if I put them on a non-white background, it will change again. But I wanted at least a reference to help guide me once I start adding in more colours. Also, Sano and Anina have average skin tone in my world; everyone is either as dark as them, or slightly darker or lighter. That’s why I really want to settle on a tone for them, because they’re going to be my basis for other characters. The strangest part about this exercise is that every skin tone I experimented with seemed like “the one” while I was working on them. For each one I thought, “Yes, that’s exactly how I imagine them," haha. These six were the ones I liked best, and right now, I’m leaning towards D or E.

If I seem oddly fixated about their skin tone, it’s because I really want there to be no question that they’re dark-skinned. It’s so rare to see dark-skinned Filipinos in entertainment in the Philippines, let alone ones who are in lead roles. I actually saw a couple of documentaries (this and this) that explored how bad skin-bleaching has become in the country nowadays. It has always been prevalent, even when I lived there, but seeing the extent to which people bleach their skin now is shocking.

However, it’s not like Sano and Anina are dark-skinned as a response to these documentaries. They’ve been canonically dark-skinned since inception. It’s just that I don’t feel as if my artistic skills have showcased this in the past. So here I am clearing up any ambiguity.

I also experimented with using black (or dark gray) for their hair. Sano and Anina have black hair, but painting with black had always felt a little weird to me. I think their warm skin tone makes their hair appear cooler, almost like blue or purple, and it just never sat right with me before. That's why in the past, I settled with painting their hair dark brown, but now it feels a little misleading.

I don’t know if I’m going to be updating any of my old artwork. Perhaps only if I’m feeling quite industrious. On one hand, it might be nice to see how my art has progressed over the years, but on the other, I also feel it's important to be consistent.