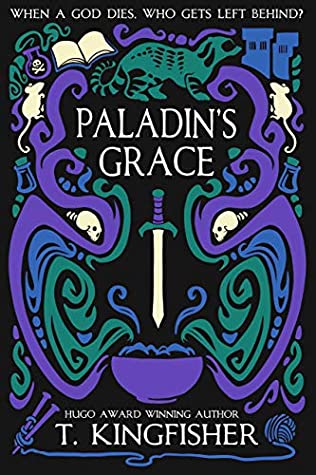 I can hardly believe that after two months of voracious reading, I've been afflicted with a severe reading slump! Alas, I only finished 1 book in April. I did try to read other books, but everything else I picked up seemed bland and uninteresting. It was quite unfortunate, as some of the books I tried were bestsellers or had unique premises. I think if I wasn't in such a slump, I would have enjoyed them another time.

For the month of April, I read T. Kingfisher's Paladin's Grace. After his god died three years ago, Stephen now works for the Rat God's servants, clerical sort folks who manage the bureaucracy of the city. He often takes on the role of a bodyguard for the priest who goes around the city to help some people. Stephen and a perfumer named Grace stumble into a botched assassination attempt of the prince of a neighbouring city. The bishop of the Rat God assigns Stephen to investigate the assassination attempt.

I'm really glad to see that T. Kingfisher's whimsical style translates so neatly to her adult titles as well. There are so many sombre and grim books in the fantasy genre these days, that it just feels like a breath of fresh air to see stories written in a more upbeat, humourous style.

Another thing that I adored in this book was the romance. Oftentimes in adult fantasy, the male lead usually gets together with a much younger female love interest, someone who would be barley out of high school or college in our world. The fact that Grace is 32 years old is amazing to me. I'm nearing that age as well, and it just feels nice to see someone around my age get a nice love story in this genre. So although this book had a heavier focus on romance than what I am used to for a fantasy book (or what I even prefer), it was still a joy to read. It was really nice seeing Stephen and Grace work through their own past traumas to be in a relationship that is healthy for them both.

My only wish is that the climax was stronger. I felt that the resolution to Grace's unfortunate predicament was cleared up way too quickly and quite by chance. I think it would have been better if Stephen and Grace had come up with machinations of their own to solve the problem. But overall, it was a really enjoyable read!

Have you read anything that really gripped you lately? Or are you in a reading slump like I am? What do you usually do when you're unable to get into any of the books you try picking up?